BlackBerry stock (NYSE: BB) dropped by about 4% over the last five trading days and has underperformed the S&P 500 which gained about 1.5% during the same period. The stock is also down by almost 20% over the last month (21 trading days). However, BlackBerry is still up by a solid 31% year-to-date. So what’s driven the recent sell-off? Much of BlackBerry’s gains this year came as retail investors bought into smaller cap tech names, hoping to set off a GameStop-like short-squeeze. For perspective, the stock rallied by over 100% in January. However, the broader sell-off in tech names in February and BlackBerry’s mixed Q4 FY’21 results have contributed to the stock’s recent decline. Now, is BlackBerry stock set to decline further or should we expect it to pick up? We believe that there is a 54% chance of a decline in BlackBerry stock over the next month (twenty-one trading days) based on our machine learning analysis of trends in the stock price over the last five years. See our analysis on BlackBerry Stock Chances Of Rise for more details. 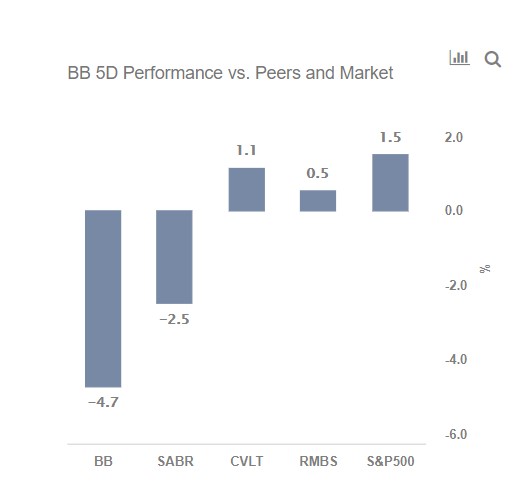 We also think the longer-term outlook for BlackBerry stock is mixed.  BlackBerry has made some progress with its automotive software portfolio in recent quarters, signing deals to license its QNX Neutrino real-time operating system to Chinese tech majors and automakers while also striking a deal with the Volvo Group, which will use QNX in its heavy vehicles. The market for cybersecurity software, which the company has been increasingly focused on, should also pick up following high-profile data breaches and hacks. That said, BlackBerry’s valuation appears high relative to historical levels, with the stock trading at roughly 6x forward revenue, compared to levels of just about 3x at the end of FY’20. Now, although a 6x multiple appears reasonable for a software company focused on currently hot areas, BlackBerry’s execution thus far has been poor. Revenues declined almost consistently over the last decade or so, despite multiple acquisitions and agreements, and sales are poised to fall again by about 10% this fiscal year.