BlackBerry stock (NYSE: BB) dropped -18% over the last five trading days and has underperformed the S&P 500 which fell by about -1% during the same period. The stock is also down by almost -20% over the last ten trading days. However, BlackBerry is still up by a solid 60% year-to-date, driven by a rally of over 100% in January. While part of the recent decline likely came from news that Ford would drop BlackBerry’s QNX infotainment software from its vehicles starting from 2023, in favor of a new platform developed by Google, the larger moves in the stock appear to be mostly technical. BlackBerry has been on the radar of retail investors who’ve bought into many small and heavily shorted names, hoping to set off a GameStop-like short-squeeze and this has likely been a big driver of BlackBerry’s considerable volatility in recent weeks. 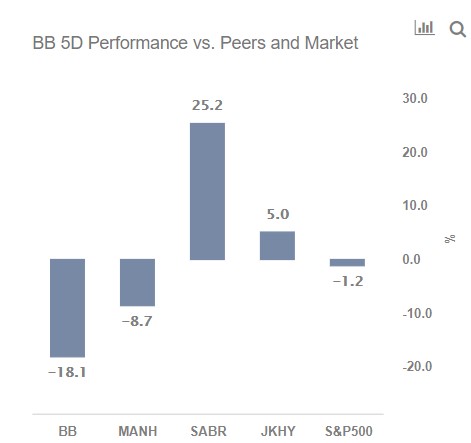 Now, is BlackBerry stock set to decline further from the recent sell-off or should we expect a recovery? We believe that there is a strong chance of a rise in BlackBerry stock over the next month (twenty-one trading days) based on our machine learning analysis of trends in the stock price over the last five years. See our analysis on BB Stock Chances Of Rise for more details.

That said, we think the longer-term outlook for BlackBerry stock is mixed. There are a couple of factors that could help BlackBerry in the near-to-medium term. Following the sizable 2020 U.S. federal government data breach, businesses and governments are likely to prioritize IT security spending, potentially helping BlackBerry’s portfolio of cybersecurity software. BlackBerry has also made some progress with its connected car business, recently signing deals to license its QNX Neutrino real-time operating system to Chinese tech majors and automakers. However, BlackBerry’s valuation appears high relative to historical levels, with the stock trading at roughly 6x forward revenue. Sure, this looks reasonable for a software stock, but BlackBerry’s execution has been far from stellar. The company’s revenues have declined almost consistently over the last decade or so despite multiple acquisitions, and sales are poised to fall again this fiscal year.

While value tech stocks look attractive, 2020 has also created many pricing discontinuities which can offer attractive trading opportunities. For example, you’ll be surprised how the stock valuation for Apple vs. Logitech shows a disconnect with their relative operational growth. You can find many such discontinuous pairs here.