The U.S. mortgage industry witnessed a small improvement for the first quarter of the year, with data compiled by the Mortgage Bankers Association showing that $313 billion in mortgages were originated over the period. [1] This compares to origination figures of $278 billion for the previous quarter and $247 billion for the year-ago period. It should be noted that 2014 was a particularly bad period for mortgage originations, as lenders did not hand out more than $300 billion in home loans for any quarter in the year. The exceptionally poor run over recent quarters can be best understood by the fact that mortgage originations have fallen below $300 billion in only two other quarters besides the Q1 -Q4 2014 period in the last fifteen years – in Q3 2008 and Q1 2011. [2]

The lower level of mortgage activity has negatively impacted revenues for the country’s biggest banking group – especially for Wells Fargo (NYSE:WFC) and U.S. Bancorp (NYSE:USB), who bulked up their mortgage banking businesses considerably after the economic downturn. In comparison, things remained largely unchanged for Bank of America (NYSE:BAC) and Citigroup (NYSE:C) as both banking giants were forced to slash their mortgage operations in the wake of the recession. In this article, we highlight the changes in mortgage origination volumes for each of the country’s five largest commercial banks over the last two years, and also what to expect from each of them over the coming years.

The mortgage industry has been extremely volatile since early 2005 – with a boom over 2005-2007 being followed by the crash that contributed to the economic downturn. As the economy recovered from the recession, record-low interest rates and government-led incentives gave a boost to the industry in 2011-2012, when homeowners rushed to get their mortgages refinanced to benefit from the improved interest environment and lending terms. Refinancing activity dried up soon, though, and without much improvement in the demand for fresh mortgages, Q1 2014 saw the lowest mortgage origination volumes since Q3 1997. Data compiled by the Mortgage Bankers Association (MBA) shows that U.S. mortgage origination volumes jumped from a low of $246 billion in Q1 2011 to $597 billion in Q4 2012 before diving to $247 billion in Q1 2014. A notable increase in fresh mortgage originations ($185 billion in Q3 2014 compared to $124 billion in Q1 2014) helped total originations climb to $300 billion by Q3 2014 before marked fluctuations in mortgage rates pushed the figure lower to $278 billion in Q4 2014. [2] The trend remained largely unchanged in Q1 2015, as fresh originations fell to $138 billion from the $150-billion figure for the previous quarter. Thankfully, an uptick in refinances ($175 billion in Q1 2015 compared to an average of $120 billion each quarter for 2014) helped the total origination figure reach $313 billion.

The table below summarizes the volume of mortgages originated by each of the country’s five biggest banks in each of the last thirteen quarters. The data has been compiled using figures reported by individual banks as a part of their quarterly announcements. Total market figures are taken from MBA’s historical mortgage origination data. It should be noted that all the banks include refinanced mortgages in addition to fresh mortgages as a part of their total origination figure for a period.

The data shows that Wells Fargo is the undisputed leader when it comes to mortgage originations. The bank has originated more home loans than its four closest competitors combined in seven of the last 14 quarters. In fact, comparing these figures with the total market size data compiled by the Mortgage Bankers Association shows that in early 2012 Wells Fargo was responsible for originating one in every three mortgages in the U.S. Its market share has shrunk over the years, though, settling below 15% for Q1 2014. The figure has hovered around 16% since then Q4 2014.

With a mortgage banking division that remained largely unchanged even after the recession, JPMorgan comes in at a rather distant second with a market share of roughly 8%. The bank has a strong presence in the industry, though, and has leveraged its country-wide branch network to maintain its market share over the years and we expect it to continue to do so in the future. With its revamped business model, Bank of America has now consolidated its position at the third position in this list with a market share of well above 5%. The diversified banking group had to slash its mortgage business considerably after the downturn (seen clearly in the chart below) and gave away its position as the country’s top mortgage originator in the process. But we expect strong growth in origination volumes from Bank of America over coming years.

As for the country’s largest regional bank, U.S. Bancorp, things have slowed down to a larger extent than its peers because of its focus on specific geographies. However, Citigroup’s limited success in boosting its presence in the mortgage industry after being badly hurt by these operations during the downturn is likely to ensure that U.S. Bancorp remains entrenched at the #4 position for several more quarters.

Notably, the market share of these five banks put together has fallen considerably since mid-2012 – shrinking from 53% in Q2 2012 to just above 30% in Q1 2014 before improving to 35% over the last two quarters. This is because banks gained considerably in 2011-2012 when people with existing mortgages refinanced their loans under the government’s HAMP initiative with large banks instead of smaller lenders or credit unions. Refinances were responsible for nearly three-fourths of all mortgages originated between Q4 2011 and Q1 2013.

The chart below provides mortgage origination volume figures for each quarter since Q1 2011, and makes it easy to see how the market share of each bank has changed over the years. 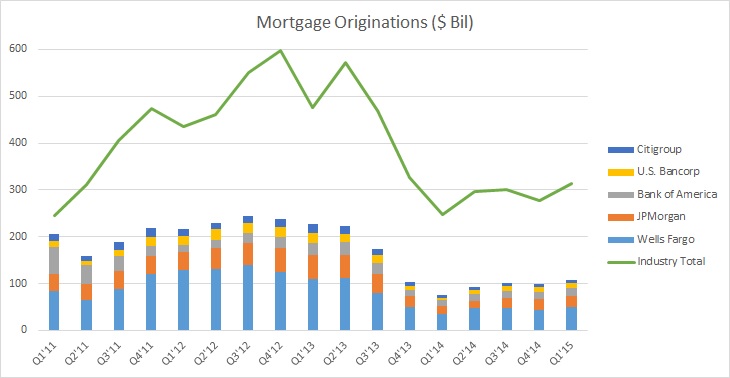 What to expect for Bank of America stock, one day after earnings?

Is Bank of America Stock Attractive At The Current Levels?

What To Expect From Bank of America Stock In Q2?

Is Bank of America Stock Undervalued?

Bank of America Stock To Beat The Street Expectations In Q4?

Bank of America Stock To Report Mixed Results In Q3?

Bank of America Stock To Pay 17% Higher Dividend From Q3

Bank of America Stock To Beat Earnings Estimates In Q1?

Price Correction In The Cards For Bank of America Stock?