The stock price of Activision Blizzard (NASDAQ: ATVI) has seen a fall of 10% in a month, while it’s down 14% over the last ten days. The recent fall can be attributed to the company announcing a delay in the launch of two much awaited games – Overwatch 2 and Diablo IV, along with a miss on Q4 outlook, as we have discussed in an update below.

But now that ATVI stock has seen a fall of 10% over the last month or so, will it continue its downward trajectory, or is a rise imminent? Going by historical performance, there is a higher chance of a rise in ATVI stock over the next month. Out of 173 instances in the last ten years that ATVI stock saw a twenty-one day drop of 10% or more, 96 of them resulted in ATVI stock rising over the subsequent one-month period (twenty-one trading days). This historical pattern reflects 96 out of 173, or about a 55% chance of a rise in ATVI stock over the coming month. See our analysis on Activision Blizzard Stock Chance of Rise for more details.

So, if this follows historical performance, it is likely that ATVI stock will rise to higher levels going forward. Also, Activision Blizzard Stock Return summarizes ATVI stock performance and chances of its rise or decline, among other metrics that matter. 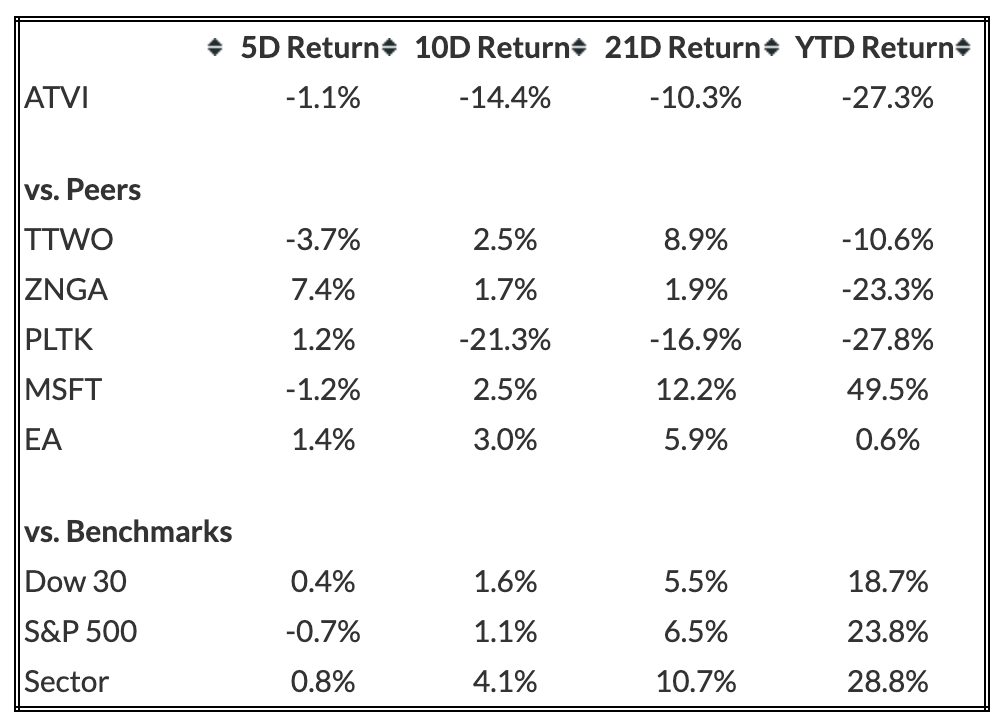 While ATVI stock may see a rebound, it is helpful to see how its peers stack up. Check out Activision Blizzard Stock Comparison With Peers to see how ATVI stock compares against peers on metrics that matter. You can find more such useful comparisons on Peer Comparisons.

The stock price of Activision Blizzard (NASDAQ: ATVI) plunged over 14% in yesterday’s trading session (Nov 3). The company recently reported its Q3 results with revenue rising 6% y-o-y to $1.9 billion and earnings of $0.72 on a per share adjusted basis, up 11% y-o-y. Both – revenue and earnings – were in-line with our estimates. But the company announcing a delay in the much awaited Overwatch 2 and Diablo IV game launches, clubbed with a miss on Q4 outlook didn’t sit well with investors. The company now expects Q4 revenues to be $2.78 billion and EPS of $1.29, compared to the consensus estimates of $2.95 billion and $1.39, respectively.

We have also updated our model following the Q3 release. We have revised the full-year 2021 sales forecast to be around $8.6 billion, in-line with the company’s guidance. We also lowered our earnings forecast to $3.72, compared to our earlier estimate of $3.85. The company now expects its full-year 2021 EPS to be $3.70. Given these changes to our revenues and earnings forecast, we have revised our Activision Blizzard’s Valuation to $94 per share, based on $3.72 expected adjusted EPS and a revised 25x P/E multiple for 2021. This marks a 15% cut to our price estimate for ATVI, and the nearly -400 bps change in P/E multiple. This can primarily be attributed to the delay in launch of two much awaited games, implying that the company is likely to see slower earnings growth over the next several quarters, compared to earlier estimates.

Despite the recent downward revision in our price estimate for ATVI stock, there is still a large room for growth, in our view. ATVI stock has been weighed down over the recent months after the company was sued for a hostile work environment, and now for a weak Q4 outlook followed by the delay in launch of Overwatch 2 and Diablo IV. At the current price of $67, ATVI stock is trading at just 18x its 2021 EPS forecast of $3.72, much lower than its peers. For instance, TTWO stock currently trades at around 40x its forward earnings, while Electronic Arts trade at 21x. Even the average multiple for ATVI stock over the last few years stands north of 23x, implying that the stock is currently undervalued.

While ATVI stock looks undervalued, it is helpful to see how its peers stack up. Check out Activision Blizzard Stock Comparison With Peers to see how ATVI stock compares against peers on metrics that matter. You can find more such useful comparisons on Peer Comparisons.

Activision Blizzard (NASDAQ: ATVI) is scheduled to report its Q3 2021 results on Tuesday, November 2. We expect the company to likely post revenue and earnings above the consensus estimates, primarily led by continued growth in the Call of Duty as well as World of Warcraft franchises. That said, the company saw a y-o-y decline in monthly active users (MAUs) in Q2, given a tough comparison to the prior year, which benefited from the lockdowns. This trend may continue in the near term, as economies open up gradually, but overall MAUs are expected to remain well above the pre-pandemic levels.

Not only do we expect the company to post upbeat results, our forecast indicates that Activision Blizzard’s valuation is $110 per share, which reflects a large 36% premium to the current market price of around $81, implying that the stock is undervalued at its current levels. Our interactive dashboard analysis on Activision Blizzard Pre-Earnings has additional details.

Trefis estimates Activision Blizzard’s Q3 2021 revenues to be around $1.92 billion, slightly above the $1.88 billion consensus estimate. Despite the economies opening up with vaccination programs underway in multiple countries, the user engagement levels for gaming has remained on the higher side, aiding Activision Blizzard’s sales over the recent quarters. The company reported revenues of $2.3 billion in Q2 2021, up 19% y-o-y, and it has guided for $1.85 billion revenues in Q3. Our dashboard on Activision Blizzard Revenues offers more details on the company’s segments.

Activision Blizzard’s Q3 2021 adjusted earnings per share (EPS) is expected to be $0.72 per Trefis analysis, slightly above the consensus estimate of $0.70. The company’s adjusted net income of $941 million in Q2 2021 reflected a solid 49% rise from its $631 million figure in the prior-year quarter, led by higher revenues and margin expansion. For the full year 2021, we expect the adjusted EPS to be higher at $3.85 compared to $3.21 in 2020. The company has reduced its sales and marketing costs over the recent past, and we expect this trend to continue in the near term.

(3) Stock price estimate much higher than the current market price

While ATVI stock can see higher levels, 2020 has created many pricing discontinuities which can offer attractive trading opportunities. For example, you’ll be surprised how counter-intuitive the stock valuation is for IAC vs. Activision Blizzard.

Activision Blizzard vs. Large Cap Stocks: Which Is A Better Investment?

Activision Blizzard vs. Mid-Cap SaaS Stocks: Which Is A Better Investment?

Activision Blizzard vs. Work From Home Stocks: Which Is A Better Investment?

Activision Blizzard vs. Value Tech Stocks: Which Is A Better Investment?

Activision Blizzard vs. Fintech Stocks: Which Is A Better Investment?