With a decline of 62%, AMD (NYSE:AMD) is the worst performer on the Philadelphia Semiconductor Index (SOX) this year. Touching a peak of $8.20 in March this year, AMD’s stock price has declined to a historical low of $1.80 since then. In its Q3 2012 earnings release last month, the company reported a decline in its revenue for the fourth consecutive quarter. (Read Our Earnings Article: Amid Dismal Results AMD Remains Upbeat On Its Restructuring Plans)

AMD manufactures and markets microprocessors used in servers, desktop PCs, and notebook PCs. While the slowdown in the PC market is one of the obvious factors responsible for the steep decline in orders, AMD has been far worse hit compared to other players in the market such as Intel (NASDAQ:INTC) and Nvidia (NASDAQ:NVDA).

Earlier this month Reuters reported that AMD has engaged investment bank JP Morgan to explore its strategic options. However, AMD claims that it is not pursuing a sale of the company or any significant assets at the time.

Declining cash reserves, mounting debt and negative cash flows from operations (for the past two quarters) have dampened investor confidence in the company. Here we look at the main factors that contributed AMD’s stock slump as well as the catalysts that could lead to a potential upside in the stock value.

Macro headwinds, a shortage of hard drives due to the floods in Thailand in October 2011, the increasing popularity of smartphones, the threat of cannibalization from tablets and lower consumer demand ahead of the Windows 8 OS launch are the key factors that have led to the current slump in PC shipments. Research firm IDC predicts the global PC market to grow by a mere 0.9% in 2012. [1] The estimated PC growth rate for the current year is lower than 2011 (2%) and a significant drop from the robust PC growth witnessed in 2009 (6%) and 2010 (14%).

AMD derives more than 75% of its value from the PC market, as per our estimate, and any adverse development in this market has a significant impact on the company’s business. Additionally, the lack of clarity in its strategy in the smartphone and tablet market, the fastest growing segments in the semiconductor industry, has also been a cause of concern among investors.

2. Leadership woes led to a lack of strategic decision making

In the midst of technology upheaval in the last few years, the frequent changes in AMD’s top management failed to provide a meaningful direction to the company. Its CEO Hector Ruiz quit in 2008 in the middle of a series of layoffs. In 2010, AMD’s board cast out CEO Dirk Meyer as they felt that he lacked an aggressive vision for the future. The then CFO, Thomas Siefert, was appointed as the acting CEO but he quit within a span of seven months.

In 2011, AMD’s revenue growth suffered because of the manufacturing issues faced by its partner GlobalFoundries. GlobalFoundries is a manufacturing joint venture that manufactures semiconductor products and provides certain foundry services to AMD. The problem not only limited the supply of Llano, a competitor to Intel’s Sandy Bridge chips, but also affected the company’s shipment of next generation Interlagos, based on its bulldozer architecture.

AMD, which held a 34.2% stake in GlobalFoundries, has since reduced its share and gave up the final 8.8% equity stake in the company this year. It has now increasingly turned to other companies, such as TSMC, for manufacturing its chips. AMD had to pay $703 million as a onetime charge to GlobalFoundries for amendment in the Wafer supply agreement between the two companies.

4. Execution issues and lack of presence in the upper end PC market

While AMD has time and again come out with compelling products to tackle competition from Intel and Nvidia, it has faced unfortunate headwinds in many of them. The company’s much anticipated Bulldozer CPU architecture was not only late to market but was also lower-performing and consumed more power than originally anticipated. Additionally, the company’s Llano APU’s failed to sell well and it had to incur a $100 million inventory write-off during Q3 2012.

Though the next version of the architecture offered marginally better performance over its predecessor, the new version failed to match up with the capabilities of Intel’s Sandy Bridge chips and the more recently introduced Ivy Bridge chips. While AMD’s chips are competitive at the lower and middle ends of the PC market, it has an insignificant presence in the high margin upper-end of the market.

What are the catalysts that could push the stock price?

With the increasing popularity of notebooks, the PC industry is shifting toward lighter and thinner form factors. AMD’s upcoming Steamroller architecture promises to cater to this segment with significant performance per watt improvement and a stronger battery life, offering higher efficiency compared to its Bulldozer and Piledriver architectures.

While the global PC shipments growth will be flat this year, research firm IDC estimates shipments to grow on an average of around 7.1% from 2013-2016. [2] A majority of this growth will come from notebooks as they continue to replace traditional desktops in the market.

Earlier in May this year, AMD introduced its 2nd generation APUs, codenamed “Trinity”, which offer up to twelve hours of battery life and almost double the performance per watt of Llano APU’s. With a 70% sequential increase in unit shipments, Trinity notebooks  accounted for one third of AMD’s total notebook shipments in Q3 2012. Though the Trinity APUs are targeted at the mainstream price points, AMD claims that it is witnessing continued consumer adoption of Trinity APUs at higher system price points as well and has had significant design wins this quarter.

Trinity APUs are based on the Piledriver architecture and the introduction of higher efficiency processors by AMD could lead to additional design wins, helping the company maintain its market share in the coming years.

With its $5.4 billion acquisition of ATI in 2006, AMD expanded its presence in additional graphics card markets. Launching GPUs gave a significant push to its business and posed a significant threat to market leader Nvidia. While Nvidia continues to account for a dominant share of the discrete GPU market, its lead is significantly less when compared to Intel’s lead over AMD in the PC microprocessor market.

AMD released a full-line of mobile discrete graphics to market recently, apart from recapturing the graphic performance leadership position with the launch of the world’s fastest GPU. While Nvidia might have the upper hand in the GPU market right now, we believe stiff competition between the two will make any significant market share gain by either unsustainable in the long run.

3. Collaboration with ARM could give the server business a new life

Last month, AMD announced its intention to design ARM technology based processors in addition to its x86 processors for multiple markets, starting with cloud and data center servers. The new generation server products will start production in 2014. The collaboration with ARM will make AMD the only processor provider to bridge the x86 and 64-bit ARM ecosystems.

On the flip side, the wide timeline leaves an opportunity for AMD’s competitors to retaliate which might negate any potential advantage that AMD could have. However, AMD claims that its suite of processor and graphics IP, third-party processor cores and SeaMicro’s innovative supercomputer fabric will enable it to deliver differentiated solutions.

Additionally, certain ARM players such as Nvidia are developing ARM-based chips for servers and plan to enter the market in the near future. Collaborating with ARM Holdings could give AMD an edge as, unlike other ARM-based players; it already has certain expertise in the market.

Earlier this year, AMD also announced its upcoming Jaguar architecture, which will have four x86 cores built on the 28 nm process. Slated to have significant improvement in terms of battery life as well as performance, the architecture will be used to develop system-on-chips aimed at tablets and ultra thin notebooks.

In its latest earnings call transcript AMD declared that it has over 125 AMD based systems up for launch with Windows 8, including tablets and ultra-thin notebooks. It also announced its new Z-series processors, code-named Hondo, for Windows 8 tablets and hybrid designs last quarter. The same will compete with ARM-based tablets and Intel’s Z2760 Atom processors. Tablets based on the new AMD platform are expected to start shipping later this year.

AMD claims that the Hondo tablet APUs will be superseded by the “Temash” ultra-low-power APU in 2013, which will be based on the Jaguar architecture. If AMD is able to score significant tablet designs, the same can serve as an additional revenue stream for the company in the future.

Thus, while we estimate the dismal performance to persist for the next few quarters, we feel that there are certain upcoming developments that could steer the company from these tough times and help it return to profitability in the coming years.

AMD claims that it underestimated the speed of change in the computing industry and realizes the urgency of a much needed restructuring of its current business. It announced a restructuring plan last quarter in an effort to strengthen its competitiveness and reduce its expense base by 25%. 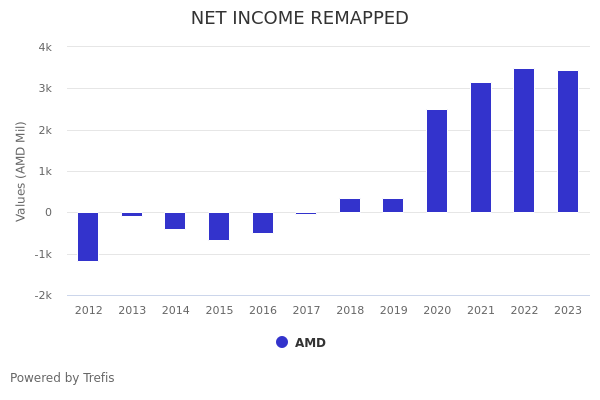 What Drove the 27% Net Income Change for Advanced Micro Devices in FY2021?

Down More Than 20% Last Month, Can AMD Stock Turn Things Around?