Apple has been increasingly counting on selling digital services to drive profitability and stabilize its revenues, which have been somewhat volatile in recent years. Services accounted for about 19% of Apple’s total revenues and about 31% of gross profits over its most recent quarter (Q2 FY’21). Apple has also launched a slew of new service offerings in recent years, ranging from fitness tutorials, paid podcasts, and streaming video. However, we believe that the AppStore and the commissions from third-party subscriptions, both key targets of the Epic lawsuit, still account for a bulk of its services earnings, since they primarily comprise commissions (typically 15% to 30% of purchase value). We estimate that the two services revenue streams together accounted for about $23 billion of Apple’s roughly $54 billion in services sales last year. While we wouldn’t speculate on the possible outcome of the case, it’s clear that Apple’s earnings would see a meaningful impact if it were forced to reduce commissions considerably or allow app developers to bypass its store. 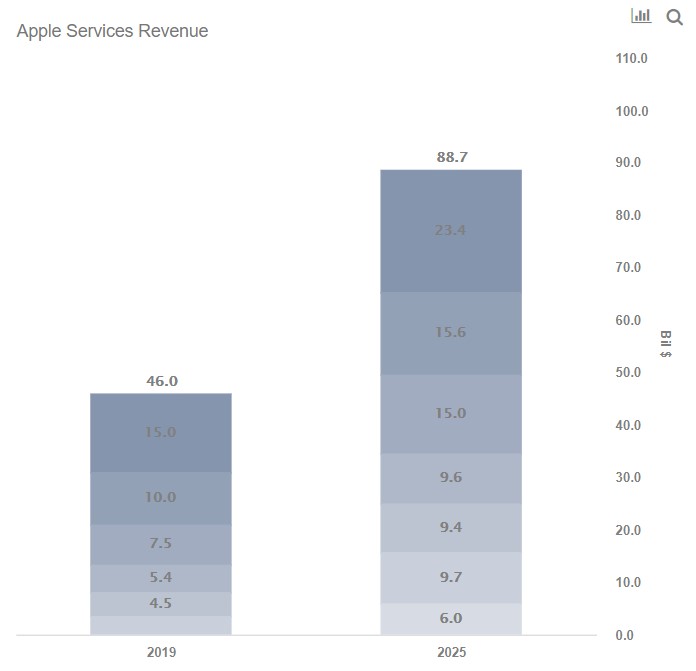 What if you’re looking for a more balanced portfolio instead? Here’s a top-quality portfolio to outperform the market, with 170% return since 2016, versus 55% for the S&P 500. Comprised of companies with strong revenue growth, healthy profits, lots of cash, and low risk. It has outperformed the broader market year after year, consistently.