American Airlines (NASDAQ:AAL) stock is up 16% in just 5 trading days. Historically, such quantum of move within a week’s time has been a low probability event and interestingly, the stock has usually corrected after such a move. Our AI engine, which analyzes past patterns in stock movements to predict near term behavior, suggests that while a downside is likely over the next month, American Airlines’ stock can return another 15% to investors over the next 6 months. We are more interested in the 6 month time frame because extraordinary circumstances suggest the possibility of a good upside for airline stocks as the demand rebounds. And that has become increasingly likely with a vaccine on the horizon and travel gradually increasing. Our detailed dashboard highlights the expected return for American Airlines given its recent move, and can also use this to understand near-term return probabilities for different levels of movements. 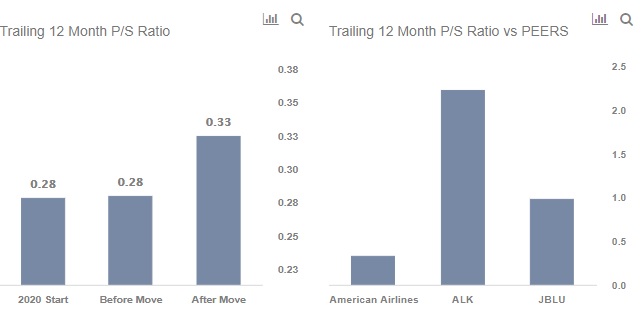 At the beginning of this year, American Airlines’ trailing 12 month P/S ratio was 0.28. After the last week’s move, this figure now stands at 0.33, which is nearly 18% higher. This indicates that despite a sharp decline in revenues, investors are valuing American Airlines even better compared to where it was at the beginning of the year. In addition, compared to American Airlines’ P/S multiple of 0.33, the figure for its peers ALK, JBLU, and ALGT stands at 2.22, 0.98, and 2.76 respectively, suggesting room for upside if the company can get a better hold of its margins which have remained historically low. Despite 7.4% growth in revenue between 2017 and 2019, American Airlines’ stock has decreased -45%, and now it is available at even a better bargain. Considering everything, this may be a good time to invest.

But what if you are looking for a diversified portfolio? Check out a high quality portfolio to beat the market, with over 100% return since 2016, versus 55% for the S&P 500. Comprised of companies with strong revenue growth, healthy profits, lots of cash, and low risk, it has outperformed the broader market year after year, consistently.

Why American Airlines Stock Moved: AAL Stock Has Lost 75% Since 2017 Primarily Due To Unfavorable Change In Price To Sales Multiple (P/S)

Should You Pick American Airlines Stock For Near-Term Gains?

Should You Increase Stakes In American Airlines Stock?

Should You Pick American Airlines Stock Ahead Of Earnings?

Is This Airline Stock A Better Pick Over American Airlines?

Is American Airlines Stock A Buy After Recent Dip?