E-commerce currently accounts for only around 3% of Wal-Mart‘s (NYSE: WMT) total revenue, but the company has been emphasizing e-commerce growth going forward, in order to remain competitive in the Amazon (NASDAQ: AMZN) dominated retail market. E-commerce has been on the rise in the last several years, thanks in large part to Amazon, making it necessary for the brick-and-mortar retailers to pick up their digital initiatives to grow further.

Wal-Mart’s Comeback In The Online Space

Wal-Mart’s e-commerce growth slowed down during the 2014-2015 period, as the company focused more on its in-store performance. However, the retailer started adding millions of items to its marketplaces gradually and resumed its growth in 2016 onwards. From an online marketplace perspective, Wal-Mart now covers more than 70 million SKUs to date, up from mere 7 million SKUs in 2015.

The company bought Jet.com for $3 billion last year, which helped it improve its e-commerce capabilities significantly. In addition, the company expanded the number of locations for shoppers to pick up online orders, making the process more convenient. Wal-Mart’s e-commerce division includes all web-initiated transactions, including those through Walmart.com such as ship-to-home, ship-to-store, pick up today, and online grocery, as well as transactions through Jet.com. Globally, on a constant currency basis, the company’s e-commerce sales and GMV increased 50% and 54% (including acquisitions), respectively, in the recent third quarter. The majority of this growth was organic through Walmart.com, including online grocery, which is growing quickly. This growth was also likely boosted by the company’s recent acquisitions in the past year – Hayneedle, Moosejaw, Shoebuy and Bonobos – which have provided the company with a diverse product portfolio in some high-margin categories like shoes and apparel, along with increased digital marketing expertise, eventually helping it face growing competition from the internet retailers. 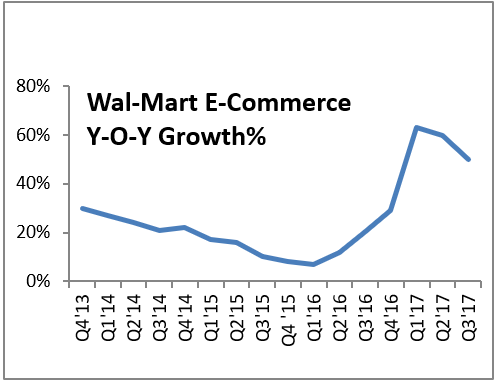 Online grocery could present a big growth opportunity for the company going forward, as groceries contribute more than 50% of the company’s sales. Given that Wal-Mart is the biggest player in the U.S. market, capturing 17.3% (as of 2016) of U.S. food and beverage retail sales, the company is looking to expand its online selection, mainly by inviting more retailers and consumer brands to sell on Walmart.com and its international e-commerce sites. In addition, online grocery offers a great potential in the long run, as the U.S. grocery sales represented only about 12% of the total online sales in 2016.

By 2020, we expect Wal-Mart’s e-commerce sales to contribute about 4% in the company’s total sales. While this figure is unlikely to be massive, it should help the company offset secular pressure on brick-and-mortar retail locations. The total U.S. e-commerce sales are expected to reach $523 billion by 2020 from $395 billion in 2016.

Our $80 price estimate for Wal-Mart’s stock is around 15% below the current market price following a rally in the stock.

See our complete analysis for Wal-Mart

Better Bet Than WMT Stock: Pay Less Than Walmart To Get More From Industry Peer TGT