Amazon (NASDAQ:AMZN) was recently in the news due to its plans to build an app that would connect truckers with shippers. [1] This news, coupled with the fact that the company recently leased 40 cargo jets to augment its shipping capabilities, have shed some light on Amazon’s plans to enter the logistics market. Though none of these developments evoked responses from UPS (NYSE:UPS) and FedEx (NYSE: FDX), in this article we look at the possibilities of Amazon entering the logistics business and its potential impact on the traditional shipping giants.

Both UPS and FedEx are involved in the last mile delivery of e-commerce shipments. These costs form a significant chunk of e-commerce companies’ operating expenses. In recent years, there have been instances when UPS and FedEx have not been able to cater to the rising delivery demands of Amazon (and other e-commerce giants) surrounding timely package deliveries. To counter such challenges, Amazon plans to improve its logistics capabilities and gain further control of last mile deliveries, thereby reducing its dependency on UPS and FedEx.

Why Amazon Is Not A Major Threat

UPS and FedEx have continually reiterated the importance of e-commerce for their revenue growth, as evidenced by the fact that e-commerce business has grown faster than other business segments for both shipping giants. At the same time they have also underlined that the fact that their growth is not dependent on any one particular e-commerce company. FedEx recently stated that 3% of its revenues are derived from Amazon and per Moody’s estimates, while an estimated 7% of UPS’s revenues come from Amazon. [2]

Last May, FedEx’s annual revenues crossed $50 billion for the first time while UPS’s annual revenues for 2015 were $58 billion. While Amazon’s deliveries might not have a significant impact on the companies’ top lines, if Amazon is able to take control of 10% of its deliveries from UPS and FedEx, it would negatively impact their top lines by $400 million and $150 million, respectively.

Another important thing to note is that both FedEx and UPS derive significant portions of their revenues from international markets and freight services, something which wouldn’t be significantly affected by Amazon’s plans to enter logistics business. Additionally, Amazon’s fleet of 40 jets is significantly smaller than FedEx’s fleet of 659 aircraft or UPS’s fleet of 236. Accordingly, while Amazon’s plans could have a minor impact on UPS and FedEx’s revenues, we do not expect it to be significant. 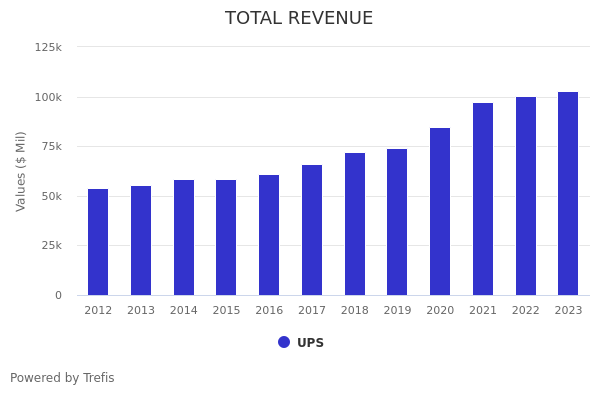 Why Are E-Commerce Stocks Underperforming This Year?

Up 17% In A Week, Will UPS Stock Continue Its Rally?

This Stock Is Likely To Outperform United Parcel Service

Will UPS Stock Rebound After Nearly A 10% Fall In A Month?

Will UPS Stock Rebound After A 7% Fall Yesterday?

Did UPS Stock Really Warrant A Decline Following Its 2023 Guidance?