Volkswagen AG (OTCMKTS:VLKAY) has overtaken Toyota as the world’s highest-selling automaker in terms of volumes this year, but there are many cracks in this pretty painting when looked at closely.

Firstly, Volkswagen has always pushed for more volumes, while Toyota had halted building new manufacturing facilities to focus on profitability, and improving service quality, and workers’ skills. The reason why Volkswagen overtook Toyota is because the latter’s volumes declined by a bigger percentage than that for Volkswagen. So it’s not really growth, but a larger de-growth for Toyota that pushed Volkswagen to the first position in global volume sales.

We have a $46 price estimate for Volkswagen AG, which is above the current market price. The stock has declined a considerable 27% in the last three months alone.

Secondly, Volkswagen has let its game somewhat slip in the U.S and China — the world’s two largest automotive markets. Through the first half of the year, Volkswagen struggled to extract growth from China, its single largest market, recording a 4% decline in vehicle deliveries in the country. The German giant’s strongest premium brand, and the highest-selling luxury brand in China–Audi, has also had a weak showing in the country, selling 0.3% fewer vehicles than the year ago period through July, with a 12.5% fall in volumes last month alone. Amid the normalization of the Chinese automotive market, which declined 3.4% in June, and a further 6.6% last month, growth for Volkswagen might be hard to come by. More bad news surfaced for Volkswagen when explosions that rocked chemical warehouse facilities in the Chinese port city of Tianjin this month damaged around 2,748 of its imported vehicles. 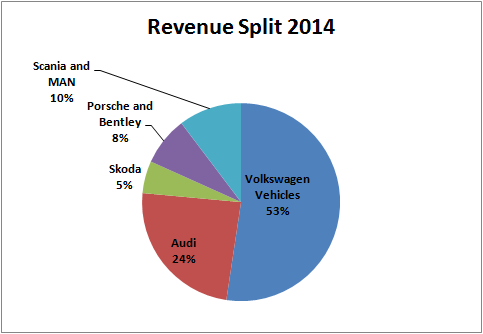 On the other hand, Volkswagen has somewhat failed to take advantage of the strong SUV demand and the favorable dollar vs euro conversion in the U.S.  The German conglomerate has seen deliveries rise in the last quarter in the U.S., with deliveries up 2.4% year-over-year through June, but this growth still lags its competitors. Toyota and GM have grown volumes by 5% and 4%, respectively, through July.

While passenger car volumes have declined 2% through the first seven months of this year in the U.S., light-truck sales continue to rise, with SUV/Crossover volume sales up 13%. The Volkswagen Passenger Cars division (including cars, light commercial vehicles, and SEAT), which forms approximately 18% of the company’s valuation, and was a massive 46% contributor to the net revenues last year, has sold 2% fewer vehicles in the U.S. through July. However, sales in June and July rose 5.6% and 2.4%, respectively, aided by the solid growth for the SUVs– the compact Tiguan and the upscale Touareg. Volkswagen is now working on a lineup of five new SUVs, aimed directly at the U.S. market, in a bid to turn its fortunes around in the country — the biggest SUV market in the world. However, one would think that with so much growth potential on offer in the SUV segment in the U.S., Volkswagen’s game has not been on point so far, considering that it has sold fewer SUVs in the country so far this year compared to 2014 levels (including the 2014 unit sales of the Routan, which was discontinued). 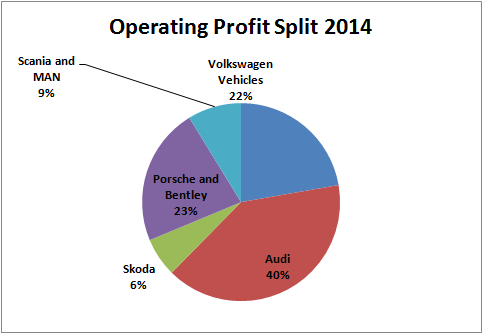 Apart from the problem of lower volume sales, Volkswagen can’t seem to get its profitability up. The group’s automotive margins are just above 6%, still much lower than the margins reported by Toyota, which range between 10-11%. The 6% margins are also supported by the likes of Audi, Porsche, and Bentley, which carry heftier margins by virtue of selling higher priced premium vehicles. Audi’s 9.7%, and Porsche’s industry-leading 15.7% operating margins, were instrumental in pushing Volkswagen’s profitability up in Q2.

The 2.6% operating margins of the namesake brand are dragging down Volkswagen’s overall profitability. Lower-than-expected volume sales, and high research and development costs incurred by the group, to push for innovation, are hurting profitability at the ailing vehicle division. The company is now aiming to save around 10 billion euros ($12.4 billion) through efficiency initiatives, with the target of 5 billion euros worth of cost-savings at its own-branded passenger vehicle division by 2017. [1] In effect, the automaker aims to improve operational return on sales for its passenger cars to at least 6% by 2018, up from 2.5% last year.

Plugging the structural shortcomings at the micro level at its various car divisions could help Volkswagen reach its margin targets. The group, which employs roughly 600,000 people and has 119 factories around the world, comprises 12 separate brands, ranging from mass market cars, to luxury vehicles, to commercial vehicles. Toyota, on the other hand, employs only around 330,000 people, and delivers a comparable number of vehicle units worldwide. Large overhead expenses and operational inefficiencies resulting from looking after a highly diversified, yet centralized business, is considered a reason why Volkswagen hasn’t been able to improve its profitability.

The company is now reportedly planning to split its twelve brands into four holding companies, based on their inter-sharing of platforms, parts, and engines, in a logical way to better align its brands and strategies. This could also give more autonomy to the U.S. and China businesses, allowing them to get more in tune with the changing demands of the market place. But till then, with lower than expected volume sales, large costs of production that are weighing down profitability, and a somewhat weak automotive environment in China, the near future for Volkswagen seems a bit uncertain.

See the links below for more information and analysis: