Qualcomm (NASDAQ:QCOM) seems to be making good progress on addressing its 28nm supply crunch. Following the recent deals it made with Samsung, UMC and Globalfoundries to supplement its main foundry TSMC – initial rumors that were later confirmed by Qualcomm on its earnings call when it said that it has four 28nm sources – the company is now rumored to be mulling buying a stake in UMC to secure supply. This rumor follows UMC’s recent offer of a 10% stake to anyone who wants to become a ‘strategic partner’ as it seeks to raise money and catch up with TSMC. [1]

If Qualcomm does acquiesce, it will have a greater say in UMC’s operations and be able to jump ahead in the queue for capacity, securing supply for future shortages. Qualcomm has guided for 28nm supply to fall short of demand throughout the year, but it believes its efforts to ramp up supply will help close the gap by the year-end. It has also said that its operating margins will decline in the near term as it continues to invest to ensure greater control over its supply chain. Investing in the supply chain as well as having multiple vendors not only helps Qualcomm diversify the risk of one vendor missing targets, but also prepares its supply chain for  strong demand for mobile chipsets in the future. We have a $69 price estimate for Qualcomm, which is more than 15% ahead of the current market price.

Smartphones have shown significant growth in 2011, and we expect this to continue in 2012 and beyond as well. Despite economic uncertainties, the consumer shift toward smartphones continues to be strong. The iPhone and Android-based smartphones have seen incredibly high growth and tablet growth is picking up momentum as well. Gartner estimates tablets have registered over 250% growth in 2011 and will continue to grow rapidly for the next few years to reach 370 million unit sales by 2016. [2] The increasing adoption of mobile devices will help Qualcomm see its mobile chipsets, bolstered by its Atheros’ acquisition last year, gain higher traction.

Emerging markets such as China are seeing an explosion in demand for 3G capable smartphones. Smartphone shipments in China registered 160% growth y-o-y in Q1 2012, accounting for almost a quarter of all smartphones shipped globally. With a billion strong mobile subscriber base and carriers increasingly trying to transition their huge 2G base, China is poised to become the world’s largest smartphone market by the end of the year. (see Qualcomm Rides China’s Smartphone Boom As It Reaches One Billion 3G Subscribers)

As for the 28nm chipsets, we see demand will continue to remain high especially since there is a lack of such designs currently in the market that not only deliver excellent processing speeds, but also conserve space and power as well. This is not only because of the 28nm manufacturing process, but also the availability of an integrated radio on the chipset. Moreover, Qualcomm’s integrated radio supports LTE which carriers in developed markets such as the U.S. are promoting widely. (see Qualcomm Leads the LTE Charge In 2012) Two popular smartphones, HTC One X and Samsung Galaxy S III, which were launched in international markets with processors from rivals used Qualcomm’s Snapdragon S4 for the U.S. launch, primarily because of the integrated LTE support.

As Qualcomm bolsters its supply chain, the 28nm production process matures, and the supply issues are overcome, Qualcomm should be able to leverage its stronger supply ecosystem to grow chipset revenues even better than anticipated earlier.

Qualcomm will also continue to benefit from the diversified set of customers that it has managed to woo banking on its broad portfolio of Snapdragon chips that includes both integrated and standalone processors. A significant design win last year was when it added Apple to its broad customer base last year, replacing Infineon (now acquired by Intel) and becoming the exclusive baseband provider for both the iPhone and iPad. (see Qualcomm Gets Big Win Over Infineon with iPhone 4S) Apple launched the new iPad in March and will launch the next-gen iPhone 5 later this year. We expect the iPhone 5 to sport a 28nm Qualcomm chipset that supports both voice and data over LTE. 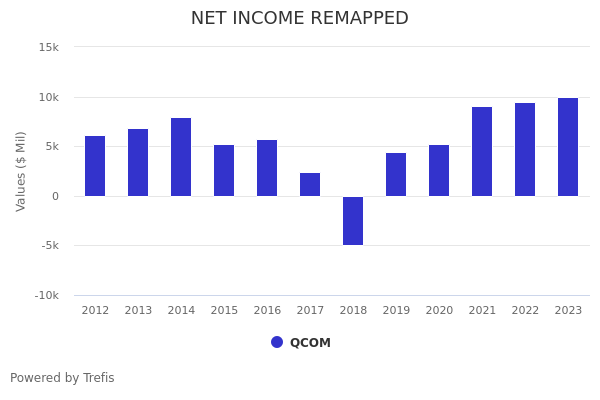 Better Bet Than QCOM Stock: Pay Less Than Qualcomm To Get More From Sector Peer KLIC