Card usage volumes in the U.S. shrunk over the first quarter of the year after scaling record highs in Q4 2014. This was expected, though, as the holiday season generally sees the highest level of activity in a year and discretionary spending is substantially lower over the first three months of the year. That said, card lenders reported a notable improvement in purchase volumes for Q1 compared to the year-ago period, as a steady improvement in economic conditions continued to drive overall spending. With the sharp growth in e-commerce sales giving people an additional incentive to switch from cash payments to the use of cards as well as internet banking options, the size of outstanding card balances and card payment volumes have risen steadily over recent years.

The country’s largest card lenders have capitalized on this to boost their top-line figures even as the low interest rate environment applies pressure on retail banking revenues. After all, card fees remain among the biggest sources of value for banking giants despite the marked reduction in profitability of this business since the economic downturn. In this article, which is a part of our ongoing series detailing the country’s largest card lenders – JPMorgan Chase (NYSE:JPM), Bank of America (NYSE:BAC), Citigroup (NYSE:C), U.S. Bancorp (NYSE:USB), American Express (NYSE:AXP), Discover (NYSE:DFS) and Capital One (NYSE:COF) – we detail the growth in their card payments over recent quarters as well as the trends to expect in the near future.

Card issuers earn a fee equal to a percentage of the transaction value each time a customer swipes his or her card, and the only avenue for growth in card fees for banks following the regulatory clampdown is an increase in purchase volumes. Each of the lenders has reported notable improvements in card purchase volumes over the last three years. The table below summarizes the U.S. credit card purchase volumes for the lenders in each of the last nine quarters. The data has been compiled using figures reported by individual institutions as a part of their quarterly announcements.

The seven card issuers listed here – the largest in the country – reported more than $460 billion in total credit card payments in the country for the first quarter of 2015. This is a 10% decline compared to the figure for the previous quarter, but a 7% jump year-on-year. It should be noted that the total payment figure of $515 billion in Q4 2014 was the best ever for these lenders. The dominance of these financial institutions in the card industry is demonstrated by the fact that cards issued by them account for around 75% of all credit card purchases made in the U.S. [1] Cards by these lenders were used for making purchases of $1.92 trillion in 2014 – 73% of the $2.63 trillion total market size for the year. [2]

American Express has the largest market share thanks to its strategy of targeting affluent customers who are likely to use their credit cards for transactions of considerably high values. On the other hand, JPMorgan comes in second because of the sheer size of its credit card customer base, which makes it the largest card lender in the country. Notably, the diversified banking group has also turned its attention to affluent customers over recent years by following marketing practices similar to those employed by American Express. These two card issuers account for roughly 40% of the total credit card spends in the U.S.

Despite having the largest global credit card portfolio among these card lenders, Citigroup figures third in the list as a large portion of its card operations are outside the U.S. – specifically in developing nations. The globally diversified banking giant’s U.S. card purchase volumes are just half that of JPMorgan’s. Capital One comes in at a close fourth spot, with payments worth $52 billion in Q1 2015 – ahead of the substantially larger Bank of America. While the latter’s payment volumes shrunk in early 2012 compared to 2011 as a result of the bank’s decision to refocus its card business, Capital One saw a sizable jump in card usage over the same period thanks to its acquisition of HSBC’s U.S. card business. Discover comes in at sixth place, which is in line with its position among these banks in terms of outstanding card loan balances (see Q1 2015 Banking Review: Outstanding Card Balances). Interestingly, seventh-placed U.S. Bancorp was the only bank here to witness a reduction in payment volumes for two consecutive quarters.

The seasonal nature of card purchase volumes is also evident from the table above, which shows that Q1 is the slowest while Q4 is the strongest period for any given year. The primary reason for the fourth quarter’s strength is that the holiday season sees the highest amount of customer spending, followed by a lull in the first quarter. The chart below makes it easier to notice this trend, while also giving a clearer picture of how these card issuers fare with respect to each other. 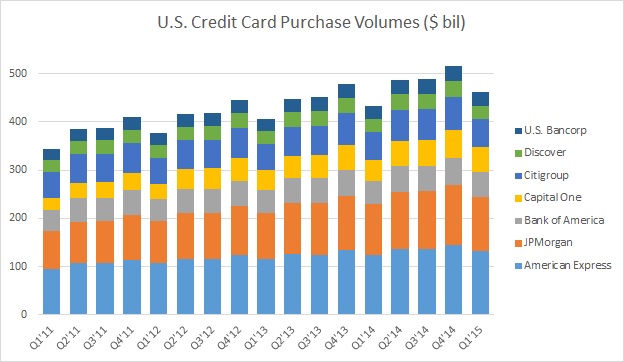 The increase in spending levels over this period is key to higher revenues for the lenders in the coming years. The chart shows how card payment volumes have grown between 6% and 7% year-on-year in each of the quarters since Q1 2011. We believe that this 6-7% annual increase in purchase volumes will continue over the coming years. But a faster-than-expected improvement in economic conditions could boost card usage at a faster rate. In such a scenario, the impact on the share value of JPMorgan can be understood by making changes below.

Is there a dip buying opportunity on JP Morgan Chase stock when it has corrected by over 20% in 30 days?

Is there a dip buying opportunity on JP Morgan Chase stock when it has corrected by over ... in null days?

What to expect for JP Morgan Chase stock, one day after earnings?

Is JPMorgan Stock Attractive At The Current Levels?

JPMorgan Stock Is Likely To Beat Consensus In Q1