IBM (NYSE:IBM) competes with Oracle (NASDAQ:ORCL) and Red Hat in the middleware software market.  IBM charges for new software licenses, maintenance of existing licenses and services associated with its popular middleware software. IBM is also among the global leaders in business systems and competes with hardware vendors like HP (NYSE:HPQ) and Dell (NASDAQ:DELL) in the server market as well as storage firms like EMC (NYSE:EMC) and NetApp (NASDAQ:NTAP) in the storage market.

In its Q4 earnings press release, IBM reported strong performance with revenues and margin improvements across several segments. Revenue increased for all segments except global financing, and gross margin improvement was reported in the software and system & technology business segments.

We currently estimate that middleware software is the largest value driver for IBM, contributing 46% of our $185 price estimate for IBM’s stock. Comparatively, servers & storage makes up only 4% of company value. While our price estimate is nearly 20% ahead of market price, there could be further upside to this number if IBM can maintain higher margins going forward.

IBM’s software segment had a very strong quarter with revenue of $7 billion, an increase of 7% over the same period last year. The growth was particularly strong in key branded middleware, with WebSphere up 32% year-over-year (YOY), Tivoli up 12% YOY, Rational up 10% YOY, and Information Management up 10% YOY.  Growth has come alongside economic recovery and a broad PC refresh cycle.

Gross margin for the segment increased 0.9% for 2010 and software profit increased $1 billion over last year.

If IBM can maintain improved middleware software gross margins going forward, leading to higher EBITDA margins for the segment, we estimate a potential 5% upside to our $185 price estimate for the company’s stock.

Servers gross margin showed notable improvement, up roughly 0.8 percentage points for the year due to a better product mix as shipment of high end servers picked up, particularly in Q4. If sustained, this improvement could further lift our $185 IBM price estimate.

Drag the trend lines in the modifiable charts above to see how various trends in middleware and server EBITDA margins could affect IBM’s stock value.

Register to win a free iPad. Visit our home page at trefis.com for details.

Our complete analysis of IBM’s stock is here. 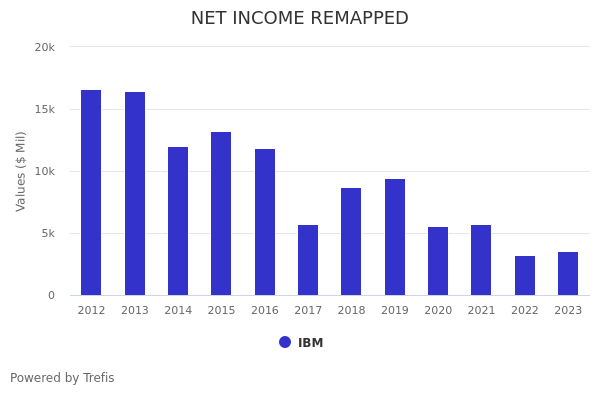 What Drove the 2.7% Net Income Change for International Business Machines in FY2021?

Will IBM’s Stock Gain Momentum Later In The Year?