Unilever (NYSE: UL) is the world’s second largest consumer processed goods (CPG) company. With a current market capitalization of $126 billion and revenues of $57 billion [1] in 2014, it is second only to Procter & Gamble (NYSE: PG) in the CPG industry. Unilever has over 400 brands spread across four broad categories; namely, Personal Care, Home Care, Foods, and Refreshments.

Personal Care is Unilever’s largest division, having overtaken the Foods division in 2011 to take the top spot. In 2014, Personal Care accounted for 37% of its total revenues, followed by the Foods division with a 26% revenue share. This gap in revenue share is set to get wider, as Unilever intends to consolidate its position in the personal care industry by making acquisitions in the premium personal care segment. [2]

In this report, we take a look at the factors that led to the Personal Care division’s increased importance for Unilever, the company’s future strategy in the personal care market, and a scenario which could lead to a significant upside in Unilever’s valuation.

We have a price estimate of $39 for Unilever, which is about 10% lower than its current market price.

Unilever’s Disinterest in the Foods Business

The rise of Personal Care division’s share in Unilever’s revenues can be traced back to the company’s change in strategy as far back as 2008. Between 2009 and 2013, Unilever’s revenues grew, but suffered a sharp decline in 2014 due to a heavy impact of adverse currency movements. [3] Just before the beginning of this trend, in 2008, the Foods division accounted for 35% of Unilever’s total revenues. Comparatively, the Personal Care division’s revenue share stood at 28% in 2008. 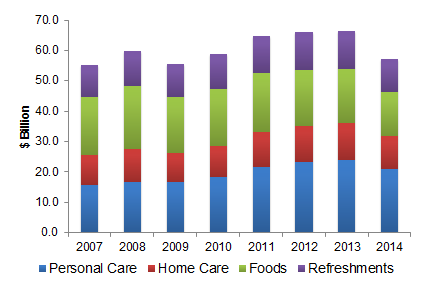 The tables have since turned on the Foods business, as its revenue share has contracted every year since 2008, while that of the Personal Care business has grown. Prior to 2008, Unilever had been consolidating its presence in the global foods market by making regular acquisitions and expanding its geographical footprint. However, Unilever’s strategy underwent a major change in 2008 and it began divesting some of its foods brands, as a precursor to its exit from certain food categories. This is because even though the Foods business commanded a high EBITDA margin, it failed to achieve more than a low-single digit top-line growth.

Consequently, in 2008 alone, the company sold off five food brands, including marquee businesses like the Bertolli olive oil and vinegar business. [4] In the following years, Unilever continued to divest its foods brands, slowly reducing its presence in a high-margin but low-growth market. Last year the company announced some of its biggest divestments in its Foods division, including the sale of Ragu and Bertolli pasta sauce brands and the split-off of the spreads business. [4]

Even as Unilever divested its foods brands, the company grew its Personal Care business organically as well as inorganically. Between 2008 and 2014, revenues of the Personal Care division suffered a year on year decline in only 2 of the 7 years. Further, its revenue share in the company increased from 28% in 2008 to 37% in 2014. This underscores not just the growth potential of the personal care business, but also Unilever’s focus on this division.

In its 2013 annual report, the company stated that it is utilizing cash flows from its Foods business to fund acquisitions in the Personal Care and Home Care categories. [5] This marked the beginning of Unilever’s newfound focus on the personal care category, which was refined further in the following year. In late 2014, Unilever’s CEO Paul Polman stated that the company is eyeing personal care brands for potential acquisitions, especially in the premium segment. [2] More recently, Unilever named the expansion of the personal care segment through acquisitions as one of the top priorities in fiscal 2015. [6].

These facts highlight the stark contrast in Unilever’s strategy for its Foods business vis-à-vis the Personal Care business. We believe that like its rival Procter & Gamble, Unilever also plans to focus primarily on its core business segments over the long term and reduce its presence in ancillary markets like foods (Read: Are P&G And Unilever Headed In Opposite Directions?). Consequently, we expect the revenue share of Unilever’s Personal Care business to increase steadily throughout our review period. 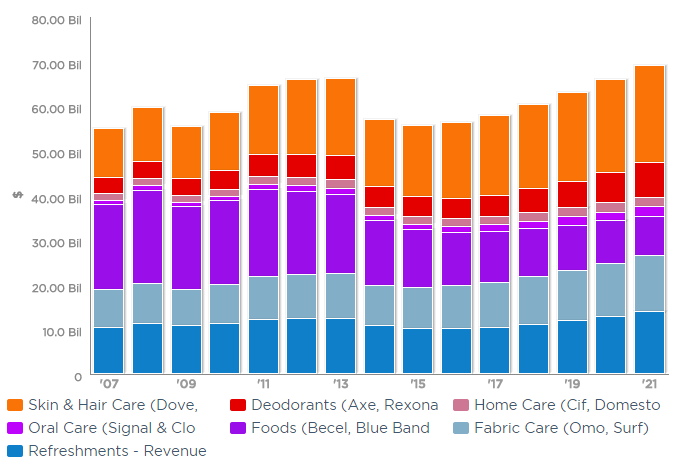 Currently, we estimate that Unilever’s market share in the global Skin and Hair Care market may increase gradually from 11% in 2014 to 12% 2021. Since the company’s acquisition strategy is focused on the high-margin premium personal care products segment, it will result in a higher EBITDA margin over the long term. Consequently, we estimate that the EBITDA margin of Unilever’s Skin and Hair Care segment is expected to improve from 21% in 2014 to 24% by the end our review period.

However, it is possible that Unilever could proceed with its acquisition strategy at a much faster pace than expected. Unilever sped up its divestments in the Foods business in 2014 and sold as many as 7 foods brands last year. If it brings the same level of urgency in its acquisition strategy in the Personal Care business, it could result in a much higher market share of its Skin and Hair Care division and the EBITDA margin thereof. In such a scenario, if the market share of Unilever’s Skin and Hair Care segment expands to 16% and the EBITDA margin improves to 26% by the end of our forecast period, it could result in a nearly 20% upside to the company’s valuation.

Can Unilever Stock Maintain Its Outperformance?

Company Of The Day: Unilever

Down 5% In A Week, Unilever Stock Set For Bounce Back

What Are The Factors Behind Unilever’s Expected Lack Of Revenue Growth Between 2018 and 2020?